John Brown was at Oregon State University studying…well, just studying, actually, without a clear direction in mind. “Kind of in limbo,” as he puts it. Then one day, his friend Tadd called and helped clear things up for him.

“He said, hey, I need someone to go to Line School with me. You interested?” remembers John, with a laugh.

With no other real pressing engagements beyond college coursework that wasn’t really inspiring him at the time, John made a decision.

“I thought it sounded kind of like fun, so I decided to give it a try,” he shrugs.

John and Tadd graduated from Northwest Lineman College in Meridian, Idaho, in 2006, and immediately shipped out for Wyoming to start their apprenticeship.

“We lived in Casper, but did most of our work in Gillette, Wyoming. We built a lot of line into the gas fields,” recalls John.

“I actually enjoyed it….had a good time out there.”

It wasn’t Tadd and John’s first rodeo, literally or figuratively. The two began their journey together in Wallowa, Oregon, where their dads were best friends. So there often wasn’t a lot of distance between the two youngsters growing up in northeast Oregon.

“I like the small-town feel. Most of my weekends were spent chasing something…birds...fish…each other. Me and my friends were either fishing or riding our bikes around.

“I worked on a ranch growing up…running sheep and cattle…doing whatever needed to be done.” 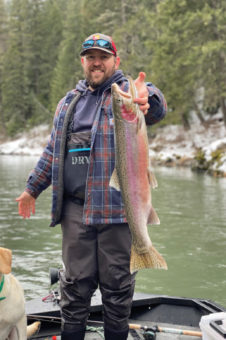 After 8 months or so of chasing around Wyoming as rookies fresh out of Line School, Tadd and John moved back to the Pacific Northwest and continued their apprenticeships, which is when, as John says, his education into the Line trade really began.

“I didn’t really know what to expect,” he says, about starting out in the trade. I traveled for most of the 4 years of my apprenticeship, which is a really good experience just for the work.”

One of the more memorable remote job sites was in New York following Hurricane Sandy in 2012.

“About 30 of us went back there…we were working for a construction company. You learn a lot of different aspects of the job in that type of situation. Really good training.

“I also went to some places that I didn’t even know existed…like out on the Washington state peninsula, places like Forks and Sequim…all those little communities. There were a lot of good learning experiences in different sorts of places.”

In 2013, things settled down a bit when his old friend Tadd McCrae was hired on at Columbia Rural Electric Association (REA). A short time later, John was hired as a Journeyman Lineman at Columbia REA as well.

“It was nice to come here and not worry about living in a 5th wheel or a trailer for a change.”

John also enjoys being back close to home. In fact, he met his wife, Shelbi, in 2013, just after moving back here, and they married in 2017. She is from Union, Oregon, so is no stranger to the small town, outdoor way of things.

“When I’m not at work, I’m either on the river or in the woods. My wife and I do quite a bit of fishing. We love to go camping.”

They may need to get a bigger tent now that they have one additional camper in the group.

“We had our first child last December, a boy. Reid is 8 months old now. He’s a pretty good kid. We got lucky…. knock on wood,” John adds with a smile, not wanting to tempt the fates. 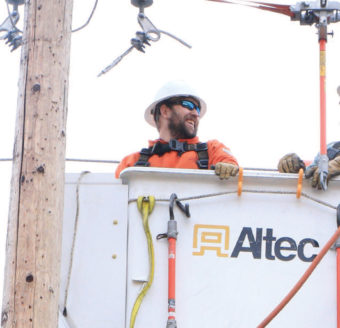 But fishing and camping trips may get bumped down on the to-do list a bit very soon, as Shelbi is preparing to go back to school to become a Radiation Tech at Providence St. Mary Medical Center in Walla Walla, where she is currently a CT Tech.

And there is already no shortage of work to be done lately at Columbia REA.

“We have lots of new houses going in. People are still building, and a lot of people are also upgrading their service, so there are a few overhead jobs going on right now. Most of the new houses are around Walla Walla, but there is a lot of commercial work going on out in Burbank, which will probably lead to more houses out there eventually.

Work-filled days, family-filled nights, busy wife, full life, John Brown is definitely no longer in limbo, and that’s okay. “I like it here. It’s a good place to work.”